If there is anything to be grateful about the change in family dynamics in the 20th century, it is that father’s could hold their babies and play with their children.  This is George Raymond Prince (1895-1939) holding either George Raymond Jr. (1921-2004) or Paul Everett Prince (1924-1991).  I love the casual informality here but my heart breaks a little as this photo is included in an album my grandmother Kathryn Preston put together for my father about his family.  Sadly, Barclay Gibbs Jones Sr. never got to hold Barclay Jr. this way.

This week in #52ancestors I dedicate this photograph of Benjamin Jones, Civil War veteran and beloved father.

Benjamin was born 12 December 1833, at Hanover Furnace (Burlington County, NJ) to Richard and Susan Ellis Gibbs Jones.  He was educated by a Mr. Gibbs who ran a school in nearby Plattsburgh, a small village that appears to have ceased to exist.  He worked for his father and uncle Samuel Howell Jones and also appears to have taught school.  In 1861, like many of the young men in his generation, he joined the Union Army and went off to war.  Sadly, his experience as a soldier appears to have destroyed his physical health and he returned from the war in 1862 a broken man.

He married Mary Elizabeth Carrell Taylor on 20 October 1862 and they eked out an existence in Pemberton, New Jersey.  Benjamin’s post-Civil War pension and other military documentation is voluminous, giving repeated evidence that he could no longer support himself and family doing hard physical labor such as farming or iron work.  He appears to have gotten employment as a lamp lighter, and done other odd jobs in the community.

Benjamin and Mary Elizabeth Jones had eleven children together, two of whom died before reaching adulthood.

Benjamin Jones died on 7 October 1896 and is buried in the United Methodist Church Cemetery in Pemberton.

This week in #52Ancestors I am continuing to build out what I know about the five Tompkins siblings who were the children of Samuel Dusenbury and Gettianna Vreeland Tompkins.  Of the five who survived to adulthood, Vreeland Tompkins was the oldest, born 8 December 1870 in Jersey City, New Jersey. 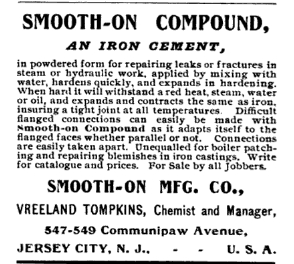 Vreeland was educated at Public School No. 12 and the Hasbrouck Institute, in Jersey City.  He graduated from Rutgers University in 1893 and was a member of Delta Phi fraternity.  After graduation he was employed as a chemist at Standard Oil Co., Bergen Port Works.  In 1895, he founded the Smooth-On Manufacturing Company, with his father serving as President and himself as lead chemist.  Vreeland invented the product Smooth-On was an iron cement compound.  I have a childhood memory of bookcases in our house and Louise Tompkins’ house which were made from the shipping containers from Smooth-On.  After Samuel D. Tompkins’ death in 1926, Vreeland assumed the presidency until 1953 and then in retirement served as chairman of the board.

In 1916, Vreeland compiled a history of the Rutgers College Class of 1893 and from this we glean some interesting details of his life.  He was active in social services in Jersey City, serving the Home of Homeless, Whittier Home Settlement and the Organized Aid Society.   He also served as the Shade Tree commissioner for Jersey City and as Mosquito Commissioner for Hudson County.

I was fascinated to discover that Vreeland Tompkins’ obituary described him as a life-long Episcopalian, first at St. Paul’s Episcopal Church in Jersey City, then at Calvary Church in Summit and finally at St. Paul’s in Chatham, New Jersey.  As one, myself, this gives me an extra connection to this interesting man.

Vreeland Tompkins died January 30, 1956, at the Hollywood Hotel in Southern Pines, North Carolina.  According to his obituary, he was living at 74 Oak Ridge Ave in Summit and had been since 1926.  At the time of death, he was listed as the chairman of the board at Smooth-On Manufacturing Co. and as a director of the Joseph Dixon Crucible Co.  He was also a life trustee at Rutgers University, having been a founding member of the College of Pharmacy.

This week my #52Ancestors post focuses on James Haviland Tompkins, the fifth child of Samuel Dusenbury and Gettianna Vreeland Tompkins.  Haviland (apparently his preferred name) was born on 15 July 1877 in Jersey City.

He graduated from New York Law School in 1900 and opened a commercial law practice in Jersey City.  An interesting side note about New York Law School: it was established in 1891 by a group of Columbia College School of Law faculty, students, and alumni who were at odds with Columbia’s trustees’ desire to interfere with the faculty teaching practices.

In addition to his law practice, Haviland is also listed as the Secretary of the Smooth-On corporation.  He and his brothers all seem to have been involved in the family business in one way or another.

Haviland married Eleonore Heike around 1908.  An engagement announcement is as close as I can get to an exact marriage date as shortly after the engagement is announced, the scandal that rocked the Heike family also breaks.  Charles R. Heike was the secretary of the American Sugar Refining Company was tried and convicted in 1910 of conspiracy to defraud the government in a case of fraudulent weighing.  The sentence was waived when the judge determined that Heike was in such poor health that he would die in prison, and instead he died at home.  His family was terribly affected by it as Eleonore (whose death may have been directly caused by something else) died in 1912 shortly after the birth of her daughter Eleonor Marie Tompkins in 1910.  Heike’s sister later committed suicide and her brother left the country and was later committed to a mental institution.

Haviland and Eleonor appear to have moved back to the Tompkins home on Communipaw Ave.  Seven years later, Haviland married Elizabeth Carol Baldwin (1891-1950) of Jersey City on 27 December 1919.  Early on in their marriage they lived at 117 Bentley Ave, which was loaded with Tompkins relations.  Eventually, they made their home in South Orange, New Jersey, where they raised Eleonor and their two children Carol Tompkins (1920-2016) and  James Haviland Tompkins (1922-1995).

Sadly, Haviland died suddenly while vacationing in Southern Pines, North Carolina on 4 March 1942.  He is buried at Arlington Cemetery in Kearny, New Jersey.