If there were a household I could go back in time to visit, it would probably be the one headed by Richard Jones.  This week in #52Ancestors I would like to explore the life of a person who oddly intimidates me from the grave and for whom my brother and I have many heirlooms passed down through the generations.

Richard Jones was born 21 February 1812, in Philadelphia, Pennsylvania to Benjamin (1767-1849) and Mary Howell (1778-1836) Jones.  His birth is recorded in Quaker meeting records as one of the first five of what would ultimately be seven children.  Benjamin was in the iron business and rose from iron monger to gentleman, if city directories have any real say in the matter.  The family appears to have divided their time between Philadelphia and Hanover, New Jersey.  Burlington county is across the Delaware River from Philadelphia but my mind boggles at the idea of transporting a crowd of children back and forth using whatever transportation was available. 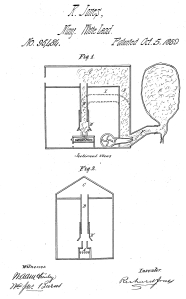 Although Richard appears to have gone to work early in the family foundry business at Hanover, NJ, he also seems to have been interested in diversifying the family holdings.  He and his brother Samuel Howell Jones established and dissolved several businesses in Hanover, Florence and Trenton between 1845 and 1870.  The pipes used in the Boston Water Works in 1847 came from Hanover Furnace.  In 1850 Richard was a principle in the New Jersey Exploring and Mining Company.  He established the New Jersey Zinc Paint Company, most likely as a result of his experiments with and eventual patents on zinc oxide extraction (1854 and 1869).  Richard was definitely something of a chemical genius but I am not sure about his business expertise.  The iron industry in the 19th century was a risky business. with many smaller operations failing due to pressures of the economy and production expenses.

By the mid 1870’s, Richard and Alice Jones are back in Philadelphia, residing at 1818 Delancy Street. Richard died here on 29 October 1890, and is buried in the churchyard cemetery at St. Andrew’s Episcopal Church, Mount Holly, New Jersey.  Many items have come down through the family, including three lovely chairs, part of what was probably a much larger set.  I think of the dinner parties and other conversations that those chairs have witnessed over the years and wonder…