I am learning that amazing connections come from #52ancestors and putting my stories out there online so that people can add to them.  Enter my newest discovery: Eleonore Heike’s wedding date and picture.  I can’t thank my cousins enough for sharing these treasures with me!

And here she is in her beautiful wedding dress!

That moment when the identified photograph ends up being more confusing than the unknown? That’s this weeks #52ancestors and #52familyphotographs rolled into one!

The man sitting in the plus fours is my great grandfather’s older brother.  Born Elwood Andrew Jones on 12 October 1869 to Benjamin and Mary Carroll Jones,   He may have worked for the Pennsylvania Railroad as an engineer.  In 1891 he married Amy Emmons.  They lived in Pemberton and raised five children: Inez, Paul, Oscar, Gladys and Myrtle.

I think the people named on the label are as follows left to right: 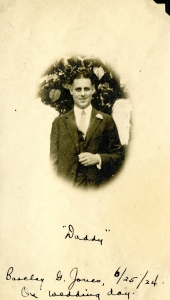 My essay this week in #52ancestors concerns my grandfather Barclay Gibbs Jones.  I never met this man because he died before even my father was born.  His legacy lives on, however, in both his name and his deep-set eyes.  As I look through family photographs  of the wedding trip taken by Barclay and Kathryn Prince Jones, I see aspects of my father, brother and nephews in the turn of his head, his smile and his eyes.

Barclay Gibbs Jones was born on 30 May 1901 to Arthur Wells and Anna Mary Wells Jones.  He was their only child, which makes his early death all the more tragic.  The family were active members of the Rosedale Baptist Church and Barclay appears often in the newspapers organizing young people’s events for the church, as well as other social gatherings.  And young Kathryn Prince is present at most if not all of these parties.  I do remember my father saying that my grandmother loved to go about socially and that as a youngster he was often dragged about as she did her visiting.

Barclay and Kathryn were married on 25 June 1924 at the home of George C. Prince (212 N. 38th Street, Rosedale.  The newspaper articles describe in detail the quiet ceremony surrounded by snapdragons and carnations.  The bride wore white Canton crepe with stockings and shoes to match.  The honeymoon was in Niagara Falls, after which the bride and groom returned to 212 N. 38th St. while they waited for their own home on Scoville Ave. in Hillcrest to be finished.  I don’t know if they ever even lived there, as Barclay died on Christmas eve.

I found among the family archives a little photo album that Kathryn Prince Jones made documenting their short life together.  The wedding pictures appear to have been taken outside 212 N. 38th St. and, in particular show off some stunning concrete porch columns.  I wonder if these are examples of the work Prince Concrete did, as I know they did a lot of porches and garages. 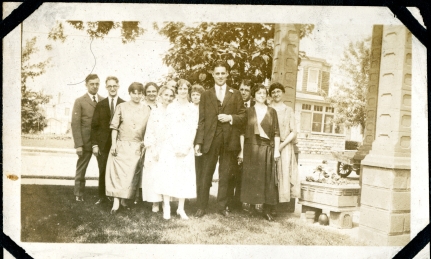 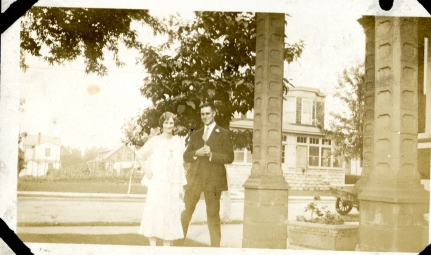 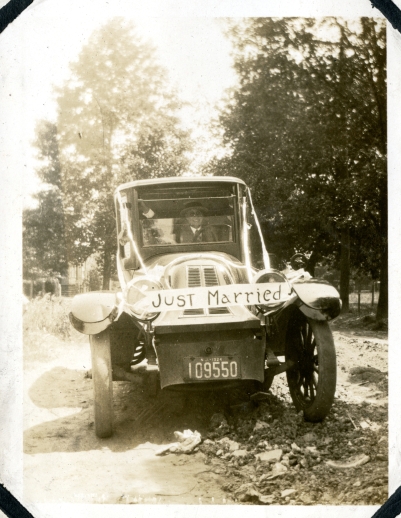 Barclay worked at Prince Concrete Co. and was apparently carrying cement blocks when he tripped over an oil can, the tip of which pierced his body.  I remember my father once telling me that the injury developed into blood poisoning which was what caused his death.  The final indignity of it all was to have his name so grossly misspelled in the paper that it took me ages to find it.

Barclay’s funeral took place in the same room he was married in seven months previously and he is buried under a simple marker at Bethel Memorial Park, Pennsauken. 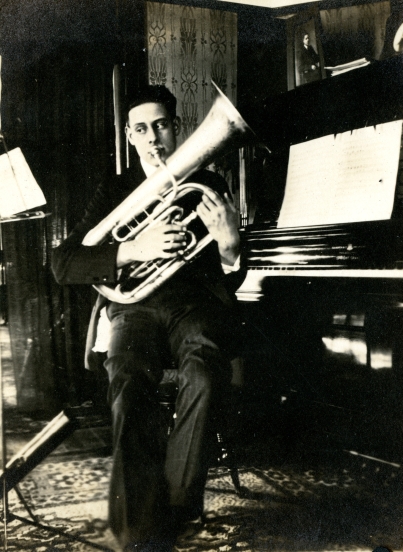 Barclay playing a sousaphone, was this the one in our attic growing up? 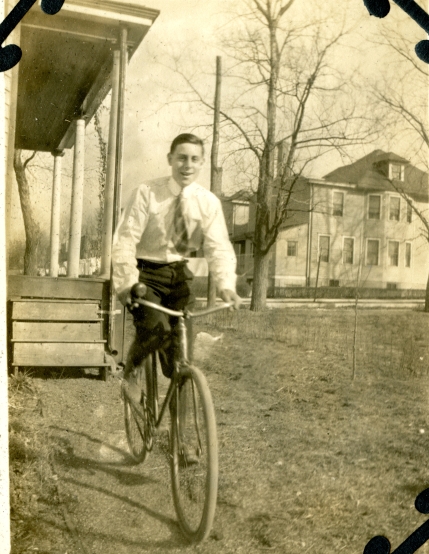 Not sure if this is Barclay but I love the smile. 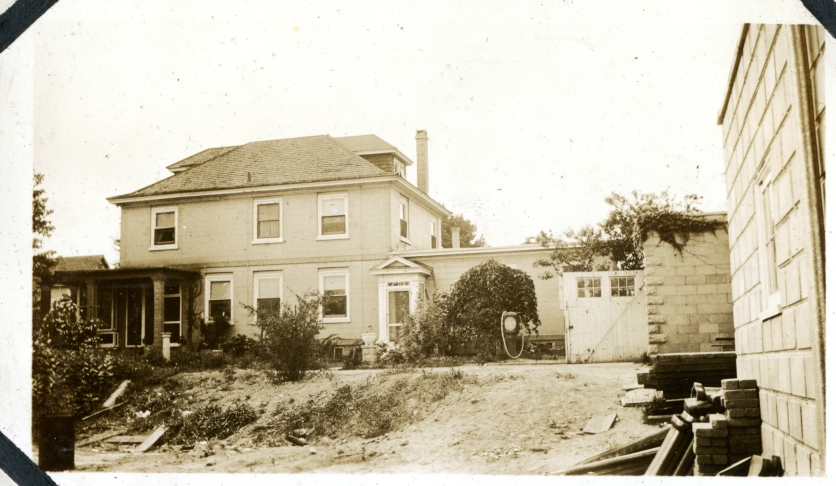 This week in #52Ancestors brings me to my namesake, Louise Tompkins.  Emma Louise Tompkins was the youngest daughter of Samuel D. and Gettianna Vreeland Tompkins.  She was born 11 October 1881 in Jersey City, New Jersey.  She lived with her parents at 533 Communipaw Ave. and there are many newspaper articles describing her participation in family trips and Jersey City social events.  She may also have been something of a singer, as there is a Louise Tompkins who is listed as soloist for various church and social gatherings.  She appears to have preferred Louise to Emma when she had the choice but occasionally there will be a record that refers to her as Emma.  All the family stories I heard growing up referred to her as “Aunt Lou.”

One such record is her marriage to John J. Voorhees on 23 November 1918.  John J. or Jack as he was called, took over his father’s company, the Voorhees Rubber Company. He was born on 9 April 1876 and had been educated in Jersey City at the Lafayette College.  He married first Florence Eliot Voorhees (no relation) who was the daughter of Abraham and Martha Voorhees of New Brunswick, New Jersey.  They had one daughter, Florence Eliot Voorhees (1908-2000).  Florence died tragically in a carriage accident on 16 July 1910. The family was traveling in a horse drawn carriage when a train rattled through on the tracks below the street.  The horse bolted and dragged the carriage over the embankment. Florence was killed and her husband and daughter were both injured.

Louise and Florence lived together after the death of Jack on 23 December 1948.  At some point they moved out of the house on Duncan Ave. and moved across the street to the apartment building on the opposite corner.   Louise Voorhees died 13 February 1971 and is buried at Arlington Cemetery. 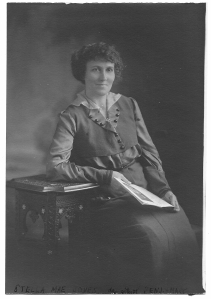 This week on #52ancestors I am writing about Mary “Stella May” Jones.  She was the ninth child of Benjamin (1833-1896) and Mary Elizabeth Carrell (1840-1922) Jones, born on 22 June 1881.  My great grandfather Arthur Wells Jones was her older brother.  I am not sure exactly why or when she became “Stella May” but that is the name she went by most of her adult life.

The first time I found her in the census was in the 1885 New Jersey state census, where she is called May.  I thought it might have been a misspelling of Mary.  But in the 1895 NJ Census, she is also called May.  In 1900, She is living with her mother and two sisters and is identified as Stella Mae.  Marriage notices in local papers used this spelling as well:

Stella Mae and Oscar lived most often in Freehold in Monmouth County but seem to have come back to Pemberton regularly.  Oscar appears to have worked with his father as a monument maker but also is listed in various Census and military draft records as a clerk, railroad worker and as a motor delivery man for the Courier-News.

According to her obituary and other newspaper articles I found, Stella Mae does not appear to have been robustly healthy towards the end of her life.  She may have suffered from complications from an appendectomy.  Estella Mae Ayres died on 18 December 1946 at Seaside Park, NJ at the home of her nephew Arthur Rue after a stroke.  She is buried in Mount Holly Cemetery. 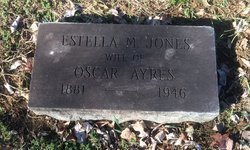 Names can evolve over a person’s lifetime.  This can present a challenge when trying to determine if the record you are viewing is, in fact, the person you are researching.  The trick, I think, is being open to the fact that your ancestor may have used different names in different contexts.  My own mother could slide fluidly back and forth from Anne Tompkins Jones to Mrs. Barclay G. Jones to Annebo, depending on the circumstances.