I found George Cardiff in the 1870 Census in Jersey City living at the same address as Thomas Tennant.  At first, I didn’t even notice him.  I wasn’t looking for him, I had actually just found Thomas after quite a search (he’s indexed as Tannant).  Thomas Tennant was married to a Hannah Cardiff, but I know very little about Hannah.  In searching for other Cardiff’s in Jersey City, I was curious about this George. There is a fifteen year age difference between Hannah and George, which could make them siblings, cousins or completely unrelated. 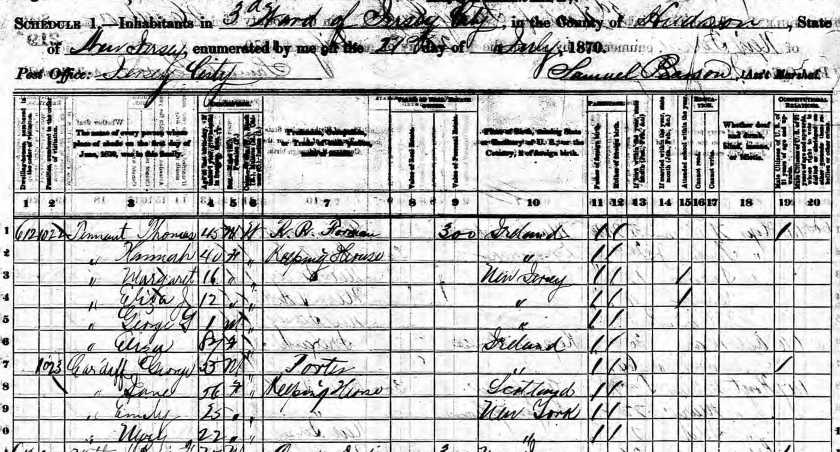 George Cardiff (b. 1815, Ireland) appears in the 1870 Census with his wife Jane (b. 1814, Scotland) and two little girls, Emily Jane (b. 1844, New York) and Mary (b. 1847, New York).  The records of the Emigrant Savings Bank account that he opened in 1864 provide a treasure trove of information about George.  The Emigrant Savings Bank is the oldest savings bank in New York City, founded in 1850 by members of the Irish Emigrant Society.  Their records reside at the New York Public Library and have been digitized.  In these records George opens an account in February 1864 and his entry notes that he is living at 420 Atlantic Ave in Brooklyn where he is employed as a porter.  The record also states that his birth year is 1815 and that he was born in County Carlow, Ireland.  George arrived in 1841 on the St. Martin and is married to Jane Bain, with two daughters, Emily and Mary.  In 1882, the record is amended to allow access to Mary Cardiff, born 1847 daughter of George and Margaret Baker.

Much of the information in the bank record can be corroborated in other records.  George Cardiff appears on the passenger list of the St. Martin, arriving in New York harbor on 23 June 1841.  An M. Baker also appears on that list and this may be George’s first wife, Margaret Baker.  George and Margaret join the First Presbyterian Church of Brooklyn in 1843, with the still confusing notation on page 2 of that record that says dismissed 16 May 1855 to Presbyterian Church of Davenport Iowa.  This cannot be corroborated but the notation about Margaret’s death on 20 February 1849 can be.  George marries Jane Bain (b. 1814, Scotland) on 23 April 1850.  Margaret is alive for the baptism of Emily Jane at the 1st Presbyterian Church on 14 May 1847 but not for Mary’s baptism which appears to be delayed by Margaret’s illness.  Mary’s baptismal record notes her mother’s name as Margaret but her middle name is entered as Bain.

Although George Cardiff and family appear in both the 1850 and 1860 Census in Brooklyn, by 1866 they are living at 83 Railroad Avenue in the same house as the Tennants.  This could be due to George needing to find work.  Through city directories and census records his job changes from porter to clerk to porter to signalman.  Interestingly, both George and daughter Mary are in Jersey City when she is added to the Emigrant Savings Bank account although she is at 107 Sussex St and he is living at 66 Sussex.  Unfortunately, they are not living at these addresses in the 1880 Census and do not appear in any index.  George Cardiff appears to have retired by 1890, as he appears in the West New Brighton city directory living with his son in law Edward D. Clark and daughter Emily Jane.  A death notice gives his death date as 27 October 1895, and notes his burial at Moravian Cemetery in Richmond.

While it is possible that George Cardiff and Hannah Cardiff Tennant are not related in any way, there are too many points of contact throughout their lives to rule out a connection.  What that connection is, remains to be seen.

One document or piece of evidence may be all that is needed to solve the mystery of George Cardiff.