This week in #52ancestors, I traveled through multiple family census records to try and track the orphaned daughter of Christiana Van Syckel McLenahan. This was a good reminder that when you don’t find someone where you think they ought to be, look sideways along your family tree.  Chances are the individual did not get missed, they are just not where you are trying to put them.

Christiana Van Syckel was born on 23 February 1828, the sixth daughter of Aaron and Mary Bird Van Syckel. She appears in early documents as Christy Anna and Christian but by the time of her marriage she is simply Chrissie.

Christiana Van Syckel married Robert Mills McLenahan on 16 December 1852 in Jersey City at the First Reformed Church of Van Vorst. They had one daughter, Elizabeth, born in 1856.  McLenahan was a prominent physician in Lebanon, NJ.

Christiana McLenahan died 8 March 1856 and is buried in Bethlehem Baptist Cemetery in Pattenburg, New Jersey. Robert McLenahan married again almost immediately to Sarah Johnson on 1 February 1857 in Hunterdon County and in 1860 they reside in Lebanon, NJ with Elizabeth.

Sadly, Robert died in 1864 and daughter Elizabeth is placed under the guardianship of Daniel C. Titus (married Elizabeth Gertrude McLenahan). I found a very detailed accounting of the guardianship which was interesting but not very informative on her life experience. I also found interesting details through Find A Grave, as the person living in Dr. McLenahan’s house put up all sorts of interesting documents.

Interestingly, Sarah and Lizzie do not appear to ever live together after the death of Robert.  Lizzie lives with Daniel’s family in 1870 and by 1880 she is living with her uncle Robert Killgore and his two daughters.  She married Paul A. Queen in December 1880 and lived the remainder of her life in Flemington, where Paul was a lawyer. 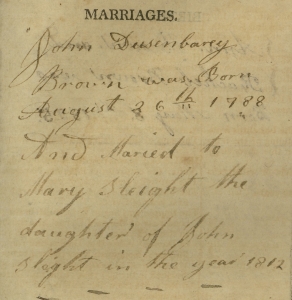 This week in #52Ancestors I wanted to work on the Brown family, a branch that I discovered, in part due to the family bible digitized by another descendant.  That bible gave me just enough information to go back to census and church records and allowed me to build out this biography.  Along the way, I came across what I think may be 19th century vanity.

Although the name John D. Brown appears in numerous military and militia records, I do not believe that this John served in any military unit.  On 24 July 1812, he married Mary “Polly” Sleght at the First Presbyterian Church, Pleasant Valley, NY.  They had six children together:

In 1827, John D. Brown along with eight other men established the Presbyterian Church of Freedom Plains.  He remained active in this congregation until his death and is buried in the church burial ground.

In 1850, John D. Brown, age 62,  is enumerated in LaGrange NY with Mary age 62, John S. age 36, Jane, age 26 and Eliza age 24.  I think John S. is mislocated because his wife Fanny and daughter Mary E are next door. Jane and Eliza have the correct ages here but not on  the next two Census.

An 1862 deed shows that John D. sold the farm to his son in 1862 with the condition that he could live there until the end of his life, profiting from the produce and livestock raised there.

John D. Brown married for the second time on 31 January 1865 to Hannah Maria Van Dyne (1804-1874), herself a widow of James Dates.  In the 1865 NY census, taken on 7 June 1865, John and Hannah (age 56) and his two daughters Martha Jane (46) and Eliza (44) are living with John S. Brown Jr. in La Grange. However, five years later in the 1870 US Census, John D. Brown appeared living in LaGrange with wife Hannah and two young women Jane, aged 26 and Eliza aged 24!  I know it is the right family because he is living next to John Brown age 50 who with wife Fanny is raising Mary, Ruth, George and Nellie.  But how did his two unmarried daughters suddenly lose 25 years off their lives?  It’s a miracle!

John D. Brown died 20 March 1875, but I am not sure if this happened at La Grange or Poughkeepsie. He is buried in Freedom Plains Presbyterian Church, Pleasant Valley.

In his will, written on 10 August 1874, he makes bequests to each of his children, but not to his second wife as she died 5 August 1874.  Clearly this is a new will but it has several interesting points:  one must be careful not to read between the lines but I would give much to be a bug on the wall of his lawyer’s office during that discussion!  He leaves $1500 to Martha Jane, Eliza, Anne Brown Haviland and Rachel Brown Velie.  A condition then states that if there is not enough to pay these amounts, then what there is is to be divided evenly amongst these four.  Then he states that if there is anything left over it is to be divided between these four and Caroline Brown Tompkins.  He then appoints his son in law, James Haviland and his grandson Samuel D. Tompkins executors.

I understand why John S. Brown is not mentioned, as the farm and all that property have already been sold to John S. Brown.  But why leave Caroline so little?  Was the relationship between the two broken or was there perhaps an earlier transaction?  This is an area where more research needs to happen!

This week on #52ancestors I am writing about Mary “Stella May” Jones.  She was the ninth child of Benjamin (1833-1896) and Mary Elizabeth Carrell (1840-1922) Jones, born on 22 June 1881.  My great grandfather Arthur Wells Jones was her older brother.  I am not sure exactly why or when she became “Stella May” but that is the name she went by most of her adult life.

The first time I found her in the census was in the 1885 New Jersey state census, where she is called May.  I thought it might have been a misspelling of Mary.  But in the 1895 NJ Census, she is also called May.  In 1900, She is living with her mother and two sisters and is identified as Stella Mae.  Marriage notices in local papers used this spelling as well:

Stella Mae and Oscar lived most often in Freehold in Monmouth County but seem to have come back to Pemberton regularly.  Oscar appears to have worked with his father as a monument maker but also is listed in various Census and military draft records as a clerk, railroad worker and as a motor delivery man for the Courier-News.

According to her obituary and other newspaper articles I found, Stella Mae does not appear to have been robustly healthy towards the end of her life.  She may have suffered from complications from an appendectomy.  Estella Mae Ayres died on 18 December 1946 at Seaside Park, NJ at the home of her nephew Arthur Rue after a stroke.  She is buried in Mount Holly Cemetery.

Names can evolve over a person’s lifetime.  This can present a challenge when trying to determine if the record you are viewing is, in fact, the person you are researching.  The trick, I think, is being open to the fact that your ancestor may have used different names in different contexts.  My own mother could slide fluidly back and forth from Anne Tompkins Jones to Mrs. Barclay G. Jones to Annebo, depending on the circumstances.

Well, it took three weeks but I finally got Research Scope Creep.  You know what I mean.  That moment when you completely ignore the #52Ancestors project criteria (find one new thing on one person on your family tree) and gleefully go down the rabbit hole, gathering bits and pieces as you go.  Three hours later, you are banging your head against the desk and crying “I know I found three new census records, his marriage record and four city directory entries, but I WANT his obituary!”

It wasn’t pretty folks, but I pulled back, hunkered down and entered what I had into RootsMagic and called “time.”  So here goes: 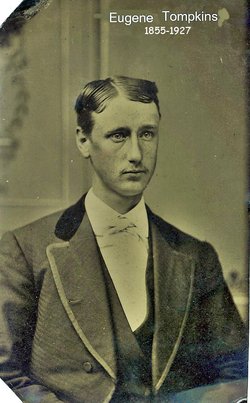 Eugene Tompkins was born in 1855 to Abraham Van Wangenin and Caroline Brown Tompkins.  Abraham and Caroline lived in Dutchess County, New York, on a farm outside of Hyde Park.  This family is another source of genealogical frustration for me as the Tompkins are rife in Dutchess County and the surrounding area and each generation named their children after their favorite siblings, creating confusing swirls of Michaels, Rachels, James, Anns, Gilberts and Johns.  To make it even more frustrating, Abraham dies at a relatively early age in 1869, and his children are dispersed throughout the Tompkins clan.  So I found Eugene easily enough in the 1860 and 1870 Census but I had let the search drop several years ago in the face of easier quarry.

My initial task for the #52Ancestors challenge was to find Eugene Tompkins in the 1880 Census.  I re-searched on Dutchess County with no luck.  I then broadened the search to include surrounding counties.  After weeding out all the wrong Eugenes, I was left with the question “did the census taker really get his information that wrong, or is he just not in New York?”  I went back to the sibling list and followed his oldest brother, my great, great grandfather Samuel Dusenbury Tompkins, to New Jersey.  At the time of the 1880 Census, Samuel is living in Jersey City, NJ with his wife and three children and his youngest brother James Tompkins.  But no Eugene.  So I followed one of Amy Johnson Crow’s “5 Online Search Strategies…” and searched on Eugene Tompkins, born NY in 1855, living anywhere and BINGO.  Top of the list is a guy living in Colorado.  Who knew?

Well, it turns out that several of Abraham’s sons went west to Colorado, but that is a story for another day and another blog.  This story is going to wrap up what I now know about Eugene.  Which is not everything I want to know but THAT IS NOT THE EXERCISE.

I found Eugene living in Denver in the 1900 Census with his wife Arizona.  They have two children, Mabel and Percy both of whom are born in Colorado.  And potentially, they appear to be living with Arizona’s parents.  Mabel E. Tompkins was born in August of 1883, so I looked for a marriage in 1882 and found an entry in an index for 1882.  Eugene is employed as a shipping clerk, which was probably a good job to have on the frontier, as Denver still was in 1900.

By 1910, the family has added some new strings for me to follow up on:  Eugene is the  manager of a wholesale fruit company, Arizona and Percy are at home, Mabel has married and buried a husband named Warhurst and Arizona’s mother has moved in with them.  Ancestry coerced me into clicking on one of their leaves and I found a potential death date through a Find A Grave entry and most interesting of all, a city directory listing for Eugene and Mary A. Tompkins as President and vice president of a brokerage firm “Tompkins Brokerage Co.”

The Denver Public Library has an awesome newspaper obituary index up on their page and through this I was able to glean obituary information on Eugene.  He died at home on 26 October 1927 and is buried at Crown Hill Cemetery.  Interestingly, Mabel is listed as Mabel E. Stewart, so perhaps another husband?

So many links and possibilities.  But time has been called.  I did not find Eugene in the 1880 Census.  I have some really good leads on where to go next and maybe next year I will do #52Ancestorfollowups but this year I am stopping now.  Happy Birthday, Eugene Tompkins!