Seven generations back on my father’s side gets to Jonathan Prince, the fellow who left Dudley, Massachusetts after 1809 to settle in Orwell, Pennsylvania. Jonathan married Patty Vinton and they had nine children that I know of, all born in Dudley. When I first started researching this line years ago, not much was available online for Dudley in the 1700’s. Now there is and this is what I learned by going back over my notes and looking for more clues.

Jonathan Prince (1769-1830) married Patty Vinton on 29 February 1792. Patty was the first child of John Vinton and Dorothy Holmes Vinton, born 17 October 1770. I tracked down the marriage record in the Dudley township records and it sent me down a rabbit hole: the record clearly states Mrs. Dorothy Holmes. So what was her maiden name?

Long story short, Dorothy was 22 years old when she married and I believe that would have allowed her to be called Mistress Holmes, an old maid at the age of 22!

This allowed me to track back even further on several lines! Dorothy Holmes Vinton was the daughter of Ebenezer Holmes and Phebe Abbott. She was born 21 Apr 1745 in Woodstock (a town that ends up in Connecticut but at this point is still considered Massachusetts).

I have already written about the Buttles line of the family that made the move from Connecticut to Pennsylvania but as I mentioned there, Jarvis Buttles returned to Connecticut for his bride Alma Cowdrey. I’ve been working on this line lately and thought I would put it out into the genealogical stratosphere in the hopes that someone knows more than I do. The Cowdrey line is complicated due to the wild spelling changes that occurred during the 19th century as various branches of the family chose “their” spelling: Cowdrey, Cowdery, Cowdry. 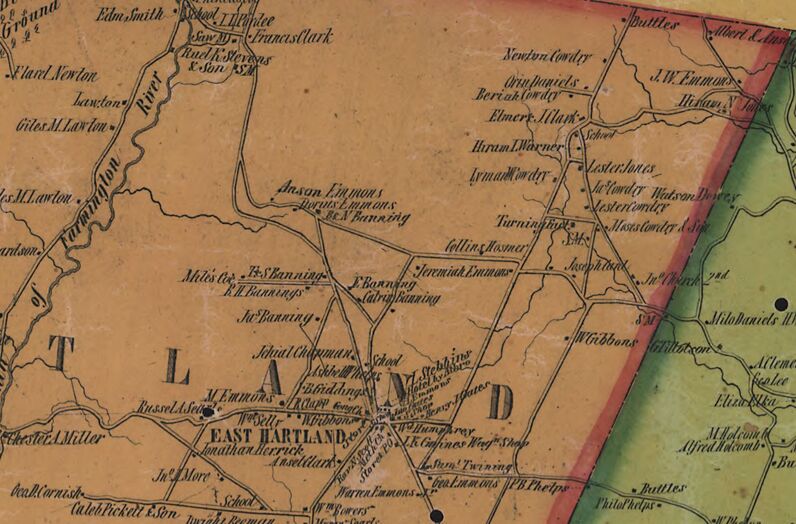 Alma Cowdrey was the fifth child of Moses Cowdrey (1773-1858) and Zeruiah Phelps Cowdrey (1776-1861). The Cowdrey’s were settled in the north west corner of Hartland Township in Hartford County, Connecticut. Many of Alma’s siblings scattered across the midwest but a few stayed in Hartford and surrounding counties. Here is a breakdown of what I know of each:

This family scattered all over the place and I would imagine that they kept in touch by mail. However, I don’t have much beyond the record of marriages and deaths that Alma C. Buttles passed on to her children. If anyone has insights, please share.

This week in #52Ancestors brings me to a westward migration story that made me rethink some of my historical assumptions.  For those of you that had always pictured the westward parade of settlers to be young men out to seek their fortune or newly weds looking for adventure, this family definitely bucks that trend.

Lois Buttles was born on 17 March 1782 in Granby, Connecticut to Jonathan and Lois Viets Buttles.  Even in 2018, Granby is described as a rural town, located in the foothills of the Litchfield Hills of the Berkshires…and… the outskirts of town are filled with dense woods and rolling hills and mountains. Imagine it in the 1820’s.  Lois married Samuel Platt Whitney on 10 March 1799 in North Granby and they preceded to have 12 children, all but one living to adulthood.

The family lived in East Granville, Massachusetts for most of their early marriage (the first 25 years), farming the land, attending church, and in the case of Samuel, voting in every election. Then, in 1834, they moved westward to Montville, Ohio to join Jonathan and Seth in what is now Geauga County .  This must have represented a huge upheaval for the family.  By 1834, seven of their children are over 21 years and at least four of them are married with families.  Of their children, six relocate to Ohio, and settle in or around Montville.  The 1840 Census shows Samuel’s family of four people: Samuel and Lois with one son between 20 and 29 years, and one daughter 10 to 14 years.  Seth Whitney and wife are listed on the same page and so are living nearby.   Jonathan R. Whitney is listed on the next page with six children.  Clearly moving to Montville agrees with this family.

In 1870, they celebrated their silver wedding anniversary at the home of their son John Viets Whitney.  This story not only made the local Geauga press paper but also appears in the Cleveland Plain Dealer.

Lois survives her husband’s death in 1871 but dies just before son Seth on 19 August 1875.  She and her husband are buried in the Montville Cemetery.  Once again, I find myself discovering Ohio roots after living in that state for so many years.  I see a road trip in my future!