Arthur Wells Jones is the subject of this week’s #52ancestors essay and one who benefited from the recent online publication of the Camden Courier-Post.  With all sorts of news to work through I was able to find an obituary; unfortunately the obituary was filled with information which conflicted with what I had documented.

Arthur W. Jones was born on 10 Dec 1875 at Pemberton, New Jersey to Benjamin and Mary Elizabeth Carroll Jones.  He married Anna Mary “Annie” Wells on 3 July 1900.  She was the daughter of Moses K. and Florence Lewis Wells.  They lived at this time in Pemberton, but I am not sure when they moved to Camden. Arthur and Annie had one child, Barclay Gibbs Jones, born on 30 May 1901.

Although the obituary made it sound like a recent move, evidence in the 1910-1930 censuses show that the Jones family was in Camden as early as 1910. At that time he was a steam car engineer, possibly for the Pennsylvania/NJ Railroad.  Their home is listed as 136 Dudley St., Camden.  By 1915, the family has moved to 309 N. 40th St., and in this census Arthur is listed as a “portable engineer,” a job title which intrigued me.  According to the International Steam Engineer of 1914, this is “one who operates a boiler or machine which directly furnishes or transmits power for any machine, appliance or apparatus used on or in connection with building operations, excavations or construction work, but does not include an operator of a drill.”  A union newsletter gave a much more understandable description: “The steam or power shovel was first invented by William T. Otis in 1839, but it did not see extensive use until after the American Civil War, when it was developed as a railway workhorse. The men who operated the shovels were known as portable engineers, to distinguish them from the stationary engineers.”  Pretty cool to think of Arthur Jones as playing the role of Mike Mulligan in my favorite children’s book Mike Mulligan and his steam shovel.

In 1920, Arthur appears to have been employed as an engineer in a shipyard and it is not clear whether this is still railroad work or not.  By 1930, Arthur was retired from the steam shovel business and listed his employment as “salesman, tea and coffee.”  Family stories line up with this as operating a milk delivery route with a side line in groceries.

Arthur died at Cooper Hospital on 26 February 1936 and is buried at the Odd Fellows Cemetery in Pemberton, NJ. 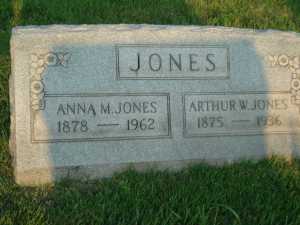