This week in #52ancestors the theme is Adventure and I decided to write about the farthest flung family on my tree: the Negus family.  The Negus line hangs off the Van Syckel line in Hunterdon County, New Jersey as one of Aaron Van Syckel’s grandchildren (by Daniel (1790-1861)) Isabella Van Syckel married James Engle Negus of Philadelphia.

James Engle Negus (1809-1884) starts out in Philadelphia where he is a wealthy merchant and chief weight clerk at the U. S. Mint in Philadelphia. However, in June of 1854, Negus is exposed for short weighting gold at the Mint. He made immediate restitution (for tens of thousands of dollars, if the newspapers are to be believed) and flees with his family to England. He later returns to the US and settles with his mother Susan, his wife Isabella and daughter Susan Engle in Somerset County, New Jersey where he owned a great deal of farmland. This may explain why I cannot find the family in the 1860 Census, and then find them in Franklin township, Somerset, NJ in 1870. James apparently saw the error of his ways, as he becomes a successful gentleman farmer in Franklin. His mother dies there, as do Isabella and Susan.

James Engle Negus and Isabella Van Syckel Negus have four children: Robert Patterson Negus (1838-1884), Susan Engle Negus (1840-1915), James Engle Negus (1842-1903) and William Shippen Negus (1844-1914).  William S. Negus appears to have been in finance. James E. Negus served with distinction in the Civil War and settled in Greenville, Mississippi where he was a banker. Susan Engle Negus never married but was active in many women’s organizations including the DAR. Robert Patterson Negus is the traveler and the one who caught my eye when the topic of adventure came up.

Robert Patterson Negus (1838-1884) was born and raised in Philadelphia. I have seen mention of his education in Europe as an engineer. He may have gotten the travel bug as the family flitted about England and Wales. He was in New Zealand in 1863 when he married Mary Ann Hargrave (1838-1881), daughter of Captain William Hargrave of Sandridge. They had seven children:

However, neither Robert nor Mary Ann Negus would live to see their 45th birthday. Mary Ann died in 1881 and Robert died 2 October 1884. This tragedy meant that four of the seven children needed a new home. Mary Ann Isabella Negus, while the eldest, could not take on the raising of her siblings. She married shortly after her father’s death, and was possibly courting David Smith when all this was going on. Courtship of a young woman is one thing, taking on a ready made family quite another. In any case, the four younger siblings are sent back to America to live with their grandmother Isabella VS Negus and aunt Susan Engle Negus. 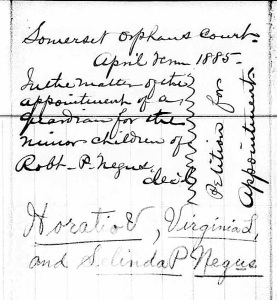 Interesting side note: the guardianship proceedings distinguish between Charlotte who is over 14 and the three children under 14. Each is noted as having about $500 to their name. James Engle Negus seems to have helped manage some of these proceedings but by my reckoning he is settled in Mississippi at this time with a wife and three children. However, William Shippen Negus appears to have settled in Bound Brook and so he may also have been involved in retrieving the children. Possibly their adventure was travelling by steamer across the world without an adult!

This line represents a fascinating side trip and I want to thank cousin Melanie Ealey for bringing it to my attention. Her email to me was exactly what I was hoping would happen when I started this blog!

This week in #52ancestors I got to explore guardianship records when an ancestor died intestate leaving minor children.  Thomas Hiram Mount was born on 11 April 1812 in East Windsor, Mercer County, NJ.  He was one of four children of Hiram (1786-1847) and Margaret Allen (1790-1865) Mount.

He lived in a house purchased by his father in 1834 (online information incorrectly names his father as Ejirain) on One Mile Road in East Windsor where he brought his wife Catherine Fisher when he married her 14 January 1835.  She was known as Kate.  They had twelve children, nine of whom survived them:

Thomas operated a brickyard and kiln, Thomas H. Mount and Company, at “Buzzard’s Point,” the intersection of Dutch Neck Road and Stockton Street.

Kate Fisher died on 9 July 1872 and is buried at Cedar Hill Cemetery in Hightstown, New Jersey.  When Thomas died shortly thereafter (8 September 1876), he did not leave a will.  His son Hiram returned to New Jersey from Ohio and with his sister Rebecca E. Applegate and brother in law Vincent Van Nest, applied for letters of administration.  There are a few confusing pieces here as various documents seem to mix the identify of Thomas’s sister Rebecca with that of his daughter Rebecca.  Rebecca Mount (1814-1892) married and Abijah Ely and then married George Cox.  Thomas named his daughter Rebecca Ely Mount, after his sister.  That Rebecca married Enoch Applegate.  Both seem to be entered into various records as Rebecca Ely Mount, which is most confusing.

Hiram requests a complete inventory of his father’s farm and holdings.  One intriguing bit is the “heap of mail” at the depot, making it sound as though no one made it into town to pick up the mail for some time before Thomas’s death. This is entirely possible as he died of a fever and the household may have been focused on nursing him.

Although there is nothing in the estate record to point to a guardianship, there were two minor children:

Thomas Hiram Mount buried next to his wife at Cedar Hill Cemetery in Hightstown, NJ.  Three of his children appear to have moved west to Ohio (Hiram, Thomas Addison and George), the remainder stayed closer to home, most dying in Mercer County.