Thinking to explore newly available records about the Prince family, I set about building out the family and antecedents of Jonathan Prince. I came across numerous references and documents and then was stunned to read that Jonathan’s great-great grandmother was one of the accused in the Salem witch trials of 1692!

Robert Prince was an early settler of the Massachusetts Bay colony, and owned land in Salem Village (Danvers, MA today). When he died in 1674 his children were all under age but his will mentions sons James and Joseph and daughter Elizabeth as well as his wife Sarah (ne. Warren). Sarah could not manage the farm on her own and so she purchased the contract for a “redemptioner” named Alexander Osburn (or Osburne) to help her work the farm. Unfortunately for her, she eventually married him. Apparently, it was not a happy marriage and later accounts paint a dismal picture of both physical and mental abuse. Sarah Osburn became depressed and took to her bed. She was accused by the young women of Salem as a witch and was brought before the court and questioned. Although she denied the testimony against her, she was jailed and transported to Boston where she died two months later.

Anyone wanting to read more can visit this online exhibit which reviews the available records of the witch trials http://salem.lib.virginia.edu/category/uph1wit.html.

Robert’s sons James and Joseph were able to reclaim their inheritance and prospered in Salem. James married a Sarah Rea and they had six children, of whom their fifth child was David Prince. David and wife Phebe Fuller (b. 1706) moved from Salem Village to Sutton where they raised five children.  David died very early at the age of 35 years and guardianship records for sons Stephen and John show them placed with James Prince and John Fuller respectively.

Stephen Prince married Abigail Perkins (1736-1820) and they raised thirteen children in Sutton as it transitioned from a British colony to a town in America. Stephen appears to have fought for the colonies during the American Revolution but print resources are jumbled and further research is necessary to build out his service. At some point in the late 1780’s the family removed to the town of Oxford. Numerous printed sources state that Stephen died in either 1780 or 1800 but he appears in the 1810 census with his sons Stephen Jr. and David. Jonathan had already removed to Sturbridge. There are also several mix ups concerning Stephen Sr’s wife Abigail Perkins and Stephen Jr’s wife Abigail Pratt.

Jonathan Prince, born in Sutton, moved with the family to Oxford where he married Patty Vinton. Shortly before the 1809 birth of his daughter Juley, the family relocated to Sturbridge and from there to Orwell, Pennsylvania. 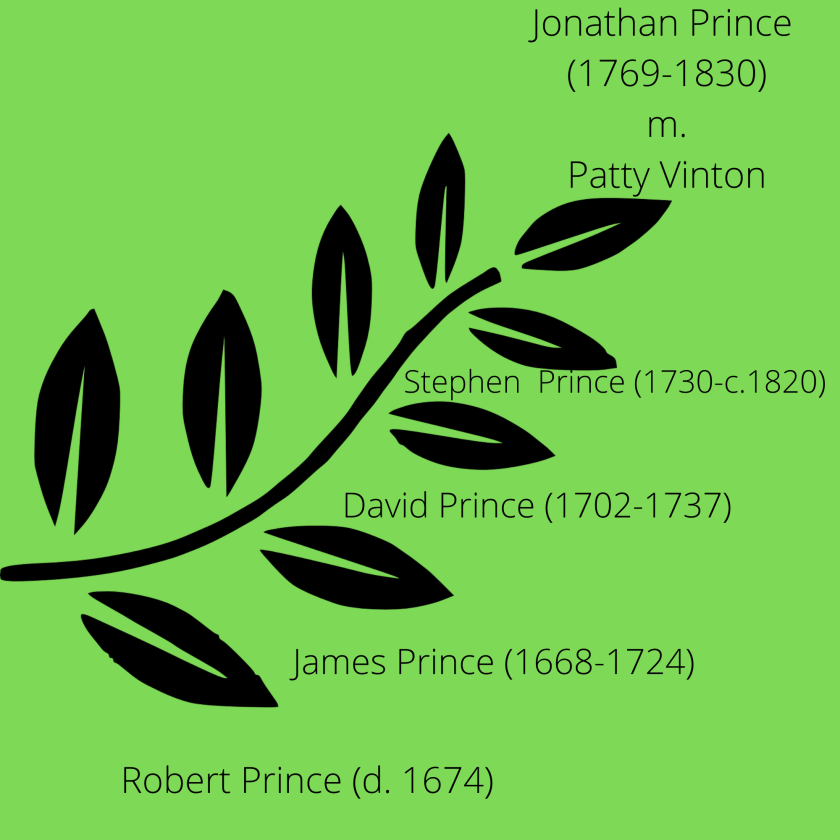 I am honored to be related to these men and women. Some gave their lives in service, some returned home to struggle with wounds acquired during service.  All were forever changed by their service. Thank you.