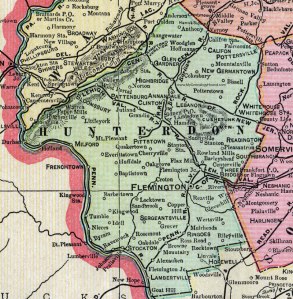 Sylvester Van Syckel was the fifth child of Aaron Van Syckel and Mary Bird Van Syckel.  He was born 21 February 1826, most likely in Union township, Hunterdon County, New Jersey. Like his other male siblings, Sylvester was well educated and eventually made his way to the College of New Jersey (later Princeton University), graduating with a BA in 1846.  He then went on to study medicine at New York University and worked at Bellevue Hospital. He graduated from NYU in 1849 and by 1850 he was back in Clinton, New Jersey establishing a medical practice.  Interestingly enough the medical association noted him as an allopath, which apparently means that he practiced traditional medicine rather than homeopathy.

The three little children have lovely grave markers in Riverside Cemetery in Clinton. The three boys who survived went on to have productive professional careers.

In 1868 the family moved into the home on Center St. that remained in the family for forty years. Sylvester died in 1906 and his widow appears to have gone to live with William and his wife Elizabeth who had taken over the Carhart family farm outside of Clinton. Mary Van Syckel died 20 February 1917.  Both Sylvester and Mary Van Syckel are buried in Riverside Cemetery in Clinton.

I have childhood memories of driving down from Ithaca to visit my aunt Louise Tompkins in Princeton, New Jersey.  Most often our route was via the Delaware River Gap, which took us through Clinton.  It is a pretty drive and I seem to remember that there is a Stewart’s ice cream stand somewhere around there that we would stop at to refuel.