This week in #52ancestors I am faced once again with a woman, Emily Van Syckel Bonnell, who existed long enough to create six children and barely rates an honorable mention in her husband’s obituary.  Can genealogists be feminists? Telling stories and giving names!

Like many of her generation, Emily’s life was recorded either as daughter or as wife.  In 1850 she is living at home with her parents and the most surprising thing about that census record is that at 18 she is listed as attending school within the year.  And two years later, on 16 June 1852, she married Alexander Bonnell. I can find very little about Alexander, other than that he was a feed and seed merchant.  His obituary tells of his membership on the New York Produce exchange and his life as an exemplary citizen of Jersey City, NJ. I found traces of him in Newark and Bergen prior to Jersey City and I think he was in a part of Bergen that eventually just became Jersey City. 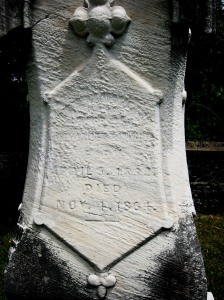 I don’t know whether complications from the birth of Charles lead to Emily’s death on 4 November 1864 but I think it likely there is a connection. Six children in eleven years in the mid 19th century would be a strain on anyone. She is buried in Bethlehem Baptist Cemetery in Pattenburg, NJ, along with Charles.

Emily died so young and with such small children at home, she probably did not get to make many friends in Jersey City. As for Alexander, barely a year went by before he married Sarah Dumont of Interlaken, NY on 11 October 1865. She traveled with Alexander when he went down to the pines in North Carolina and died there as a result of a miscarriage 25 January 1878. By the 1880 census however, Alexander has married a third time to Sarah Jane “Jennie” Douglass, with whom he had a daughter Edith Bonnell. Alexander died 30 September 1886 in Jersey City but is buried back with his roots in Hunterdon County at Bethlehem Cemetery in Union, NJ.

This is often how it works: you start trying to document the life of a woman and end up finding stuff on the men.