Once again I select a name for my #52ancestors essay so unusual that I should have no trouble picking up the thread of his life story.  And once again, I re-learn the lesson about common words in names and geographic location.  This time I picked Francis Mumford Gibbs.

Francis was born on 17 September 1898, most likely in Burlington County, NJ but also possibly Monmouth as that is where the family is living in 1895, to Barclay White (1868-1957) and Elizabeth Watts Jones (1873-1900) Gibbs.  He was the youngest of three children but the only one to see his thirtieth birthday.

The family moved to Philadelphia, where Barclay worked as a machinist and there Barclay married Jennie S. Greenwood on 12 November 1902.  Ten years later the family is living in York, PA where Barclay Gibbs was employed by Gulf Gas and Oil as a manager.  It is in York that the family lost both Mattie and Elton, Mattie to tuberculosis and Elton to a heart defect.  Francis married York native Margaret Elmira Herman sometime around 1925. Francis also seems to have moved around a lot as each of their four children are born in different places: 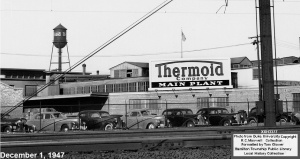 Francis eventually settled in Trenton, NJ where he worked for a company called Thermoid, which made rubber brake pads.  The children all appear to have come of age in Hamilton township.

Francis died suddenly from a heart attack on 25 April 1959.  He is buried in Ewing Cemetery and shares a headstone with William Bruce, who tragically died in an automobile accident in 1954.

The most complicated part of investigating this story was the family name: the Gibbs family is an old and fertile family in New Jersey and many of the branches named their children after other branches.  The name Barclay, for instance, pops up all over the place, most likely because it too is a place name.  Most concentrated in Burlington and Camden counties, which made parsing out this line more difficult than I expected.  Also, I came to realize that Francis Mumford Gibbs may have gotten his name from his mother’s sister Susan Gibbs Jones, who married Francis Mumford, whom I know absolutely nothing about.  But that is for another essay.