This week in #52Ancestors I follow the trail of Elijah Van Syckel from Hunterdon County, New Jersey to Philadelphia, Pennsylvania.

Elijah Van Syckel was the second child of Aaron (1764-1838) and Catharine Opdyke (1762-1851) Van Syckel.  The majority of his siblings stay in the Hunterdon County area but by the time Elijah turns thirty he is in Philadelphia with an established grocery on N. 2nd St. He married Sarah Belinda Smith (1799-1871) of Doylestown on 22 January 1818.  They had nine children:

Elijah appears to have established his grocery and then expanded it to sell liquor.  He then gave up the grocery business and solely sold wine and liquor.  He appears in city directories and merchant listings fairly continuously from 1818 until 1850.  During the 1830’s he was in business with John Garrison but in 1835 this is dissolved and Elijah continues on alone, eventually adding his sons to the concern.  One curious discovery: in 1824, Elijah was granted relief from the US government because three hundred and fifty-two cases of sugar were destroyed in a fire in 1822, upon which $4217 in duties were due.   Elijah apparently appealed for aid in paying the duties as the sugar had not been insured. 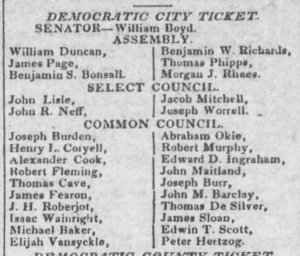 He also appears to have been active in local politics as he has an unsuccessful bid for election to the Common Council in Philadelphia in 1827.  In 1839 he  is appointed to a committee to examine and report on the state of the Schuylkill Bank.

Elijah retired in 1849 and left the business to his sons.  Several sources noted that the business was worth close to one million dollars at that time.