This week in #52ancestors I once again come up against that age old genealogical principal of looking for one record and finding not that record but another that solves a different mystery.
I can track back to George Mortimer Prince (born Bradford Co. PA 1837, died Federalsburg, Md. 1909) with great assurance but the leap to George Washington Prince (1808-1888) is more difficult and further back is going to require feet on the ground in Massachusetts doing hard research.  If I am correct in my conclusion that George Washington Prince is the father of George Mortimer, then Chandler Prince is an uncle.  Confused much?
Jonathan (1769-1831) and Patty Vinton (1770-1831) Prince had nine children, all born in Massachusetts, the first five in Oxford and the last four possibly in Sturbridge.  The fourth child in birth order is Chandler Prince, born 14 June 1797 in Oxford, MA, and the eighth is my ancestor, George Washington Prince, born 17 July 1808 in Sturbridge.
I find Chandler as the head of household with a family in the Census in 1830 in Orwell, Pennsylvania as well as in 1840 and 1850.  From this I draw the conclusion that Chandler married Sally [possibly Lovette] prior to 1825, but I have not been able to find a marriage record yet. 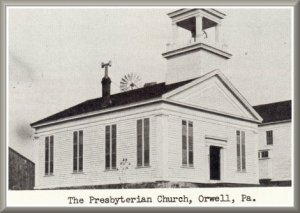 Chandler and family appear to have been involved in the Presbyterian Church, as on 14 January 1845, Chandler Prince puts up $5.00 toward the building of a Presbyterian church in Rome, Pennsylvania.
The next time I find mention of Chandler is in the burial inscriptions from the Orwell Valley Cemetery, Bradford County, Pennsylvania: Chandler H. Prince, died 9 Feb 1852, aged 55 years.
No will or estate is listed in the index to Registers for Chandler Prince but I did discover that the Index to Register’s Docket is up online through  FamilySearch.  And there, nestled between Chester and Ermina Prince is none other than George W. Prince’s will.  Now I am off to write the Bradford Clerk of Courts for a copy of that will, which appears to have been executed by none other that George M. Prince. 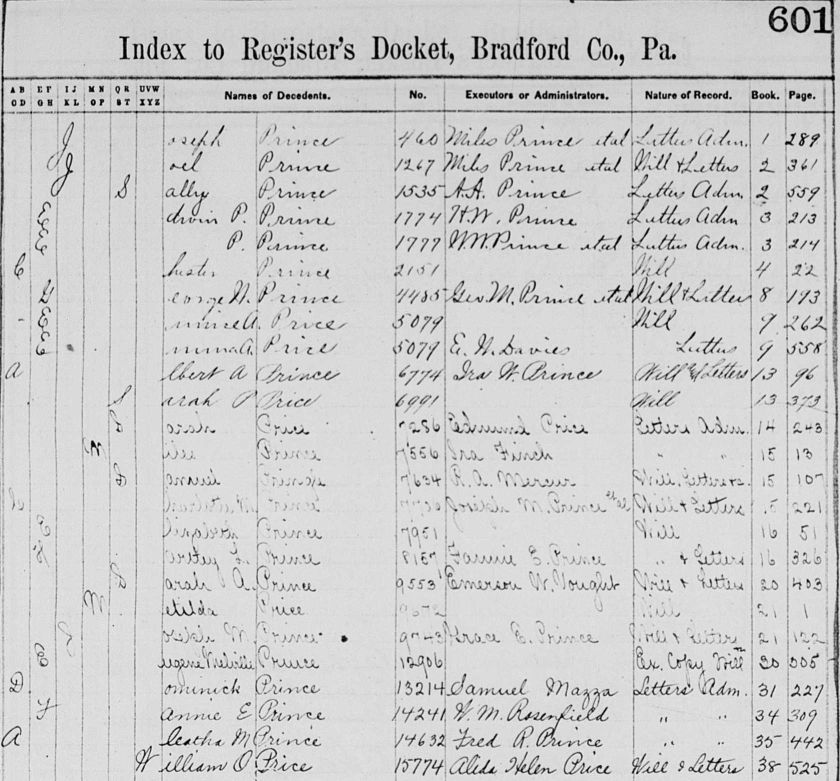