Mary Craw Frost was born on 13 May 1808 to Aaron (1778-1855) and Polly Craw (1782-1860) Frost.  She was born in Wilbraham, a tiny burg in what is now Hampden County, Massachusetts.  Mary was one of twelve children, a fact that appears in conflicting documentation about their names and birth order.  Somewhere there is a bible… 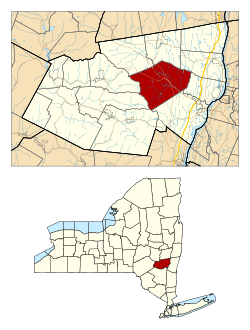 I also have conflicting information about how she and her parents end up in Bradford County, Pennsylvania.  Some records state that she married her husband Henry Hine while in New York, which would make it Greene County.  Cairo, NY is almost directly west from Wilbraham, so it is possible that on their way west they stopped off, or perhaps that was their destination, but when Hine moved on to Orwell, her parents went along as well.

I have quite a few sources that agree on 29 September 1830 for the date of marriage.  However, the place is a problem.  I have one source that says Orwell and one that says New York.  Henry Hine is listed in the 1830 Census in Greene County New York.  As is his father in law, Aaron Frost.  I have found a transcription of a church membership record in Greene County which shows Henry W. and Mary Hine moving from Cairo to Durham and being received by the First Presbyterian Church on 16 April 1835.  I am going to go with New York rather than Pennsylvania.  In 1840, I find both Aaron Frost and Henry Hine in Bradford County, which is a good thing, as that is where Henry’s children are being birthed.

Sadly, beyond the bearing of children, I have very little information about Mary C. Hine.  I know that she was a member of the Presbyterian Church in New York but switched to the United Methodist Church in the mid 1870’s possibly because her daughter Sabrina Hine Hines did as well.  Mary C. Hine lived with Sabrina and Joseph Hines after the death of her husband Henry W. Hine in 1868.  Mary Craw Frost HIne died on 10 August 1889.